Alright. The time has finally come. I have finally finished crocheting each and every panel of my Mario Blanket. They are all crocheted together. All that is left is crocheting a border around it. However, I have been working my buns off on this thing and I don't know when I'll finish the border. I'm so freaking excited to have it "done" that I'm going to be unveiling it.........NOW!

Here it is, in all of its technicolor glory: 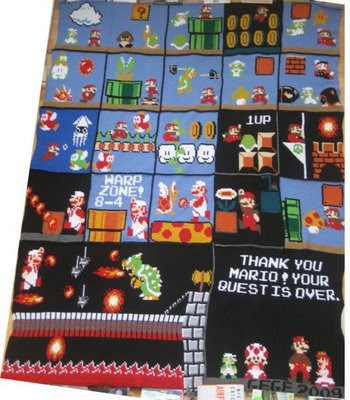 ACK!! How awesome is that?!?!? It's so huge, I had to lay it out in my foyer and go upstairs to get a photo. Here's a pic of my birthday boy stretched out on it for a size perspective. My honey is 6'2". 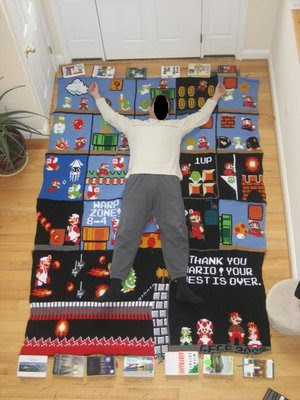 Here's a shot of it on my queen sized bed- its ultimate resting place. 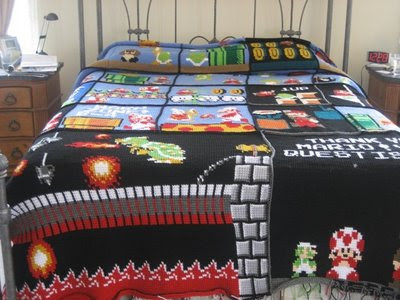 Unfortunately, I did not get it all done by his birthday party. I was working on the last panel and had only this to show for my months of hard work: 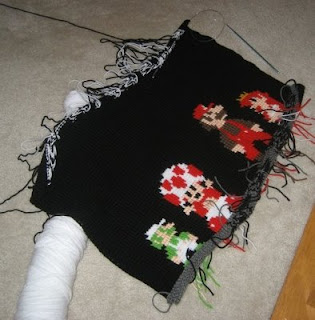 Going back to my husband's birthday- my sister had a wonderful idea! To go along with the theme of my blanket, she suggested we throw him a Mario Party....complete with a Mario cake. Well, my entire family is artsy/fartsy, and my sister is no exception. She had a WONDERFUL idea for a cake and it turned out BEAUTIFUL!

Here is the artist at work: 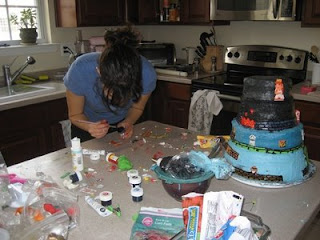 She really wanted to have fondant to make it look absolutely smooth and perfect; however, that stuff is expensive as heck....especially for such a large cake....so we used a cream cheese frosting that was supposed to harden "like fondant." Ummm....no. It did not. Darn those lying liars who tell lies. However, it tasted great! 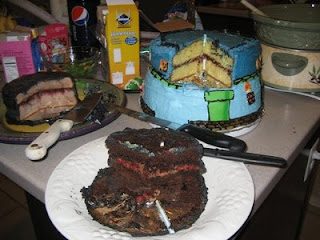 We had so much fun that night- had some friends over and played Wii....and of course some old school Super Mario Bros. I don't know if I'll ever be able to top this crochet project- or at least not for a while. I've got some ideas burbling around and, once my shoulder, neck and finger muscles go back into a relaxed state, I will be back with my yarn and my geeky obsessions. :) I'm going to take a little time off since this project has seriously taken over my life, but I'll be back with some new purses and scarfs in the very near future.

Onto the individual pictures!

This is a Flickr badge showing public photos and videos from Gege_Crochet. Make your own badge here.